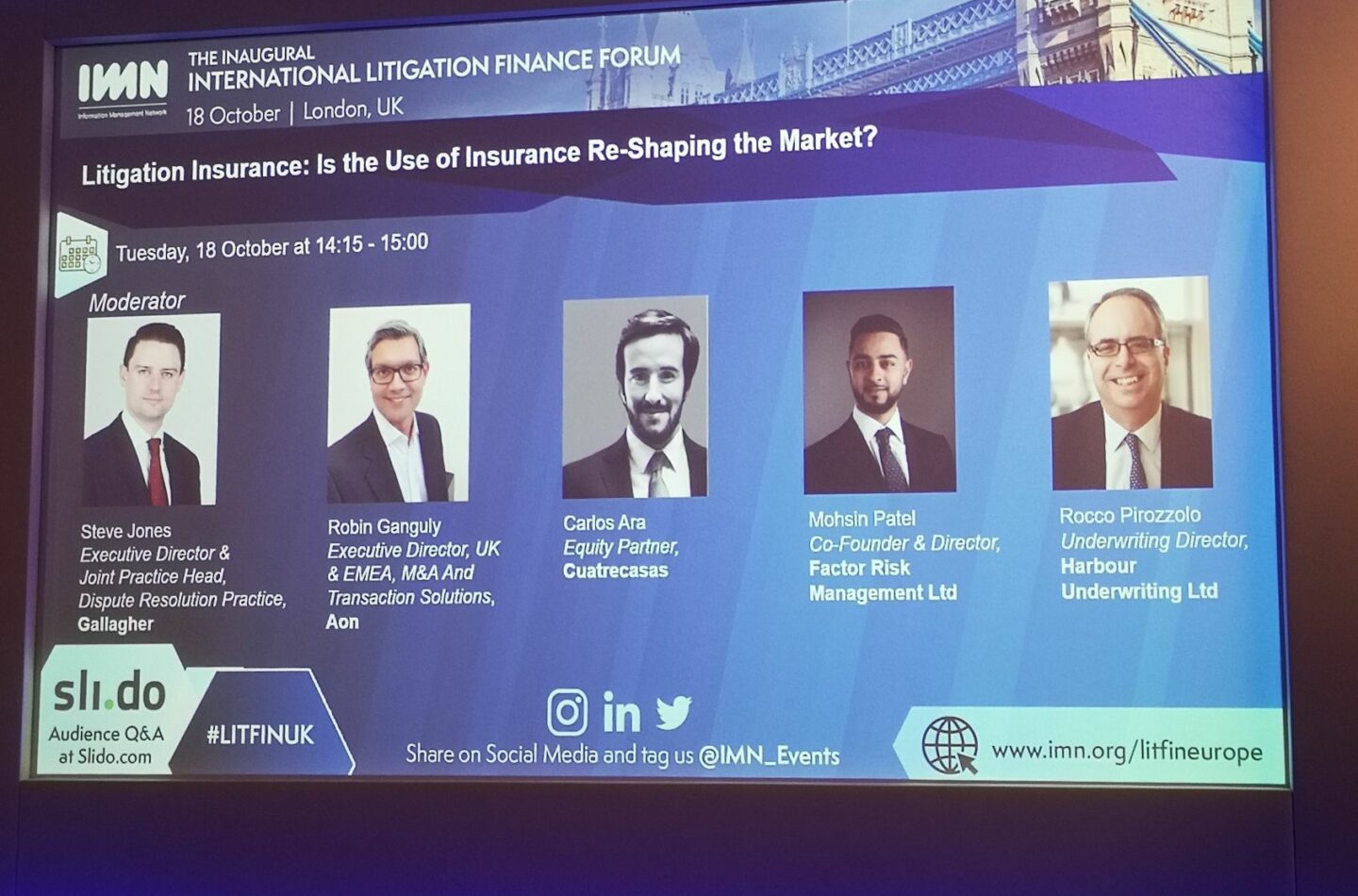 Rocco was joined on the panel by Robin Ganguly of Aon, Carlos Ara Triadu of Cuatrecasas and Mohsin Patel of Factor Risk Management, and the panel was moderated by Steve Jones of Gallagher.

Steve Jones opened the discussion by asking Rocco how After the Event (ATE) insurance has evolved and what related products have been developed.

Rocco said adverse costs cover remains the staple diet of the ATE insurance market. “However, over the years, capacity limits have increased, driven by litigation funders and the cases they fund,” he said. “Also,” he said, “when you look at the jurisdictions in which cases are insured, such as England and Wales, Australia, Canada, etc., you are going to see significant levels of costs being incurred. Fundamentally, cases won’t get off the ground unless you have significant ATE insurance cover in place.”

Specialist broker Mohsin Patel reiterated this by saying the increased breadth and scale of insurance requirements in recent years has been led by large-scale collective actions, group litigation and competition claims. He said it is now not unusual to see £10 to £20m limits of indemnity, with the result that there sometimes need to be co-insurance arrangements and sharing of risk between multiple insurers. Mohsin also said there is an increasing appetite to find ways to meet the demands of funders. “Many of the large, funded cases require creativity when it comes to structuring, whether that’s the use of sub-limits or staged premiums, for example,” he said.

The panel then discussed capital protection insurance (CPI), which allows funders to remove some of their downside risk in return for lower returns. Robin Ganguly explained some of the portfolio CPI solutions available for funders. This might be a portfolio of existing cases, empty portfolios going forward, or a hybrid of the two.

Steve Jones then asked Rocco about the availability of ATE insurance for defendants. Rocco said cover is available, but the challenge is always defining what represents a win for a defendant. “A total win is easy enough to quantify,” he said. “This is when a claimant discontinues the case, or it goes to trial, and the claimant loses. But you can have other degrees of success for a defendant,” he said. Rocco gave the example of a claim against a defendant where it has assessed its exposure to damages as £5m, where a ‘win’ may be only having to pay £3m. Whilst defining a win can be hard to pin down, it is possible and depends on the circumstances of each case. Rocco explained that, in many instances, “defendants want a free rein to settle before trial but have cover in place in the event of a catastrophe, i.e. going to trial and losing badly”.

Finally, the panel discussed contingent risk insurance, such as judgment preservation insurance, which protects a claimant’s damages against a judgment or arbitral award being reversed or overturned. Unlike ATE insurance, which is limited to costs, this relates to the damages awarded in a case.