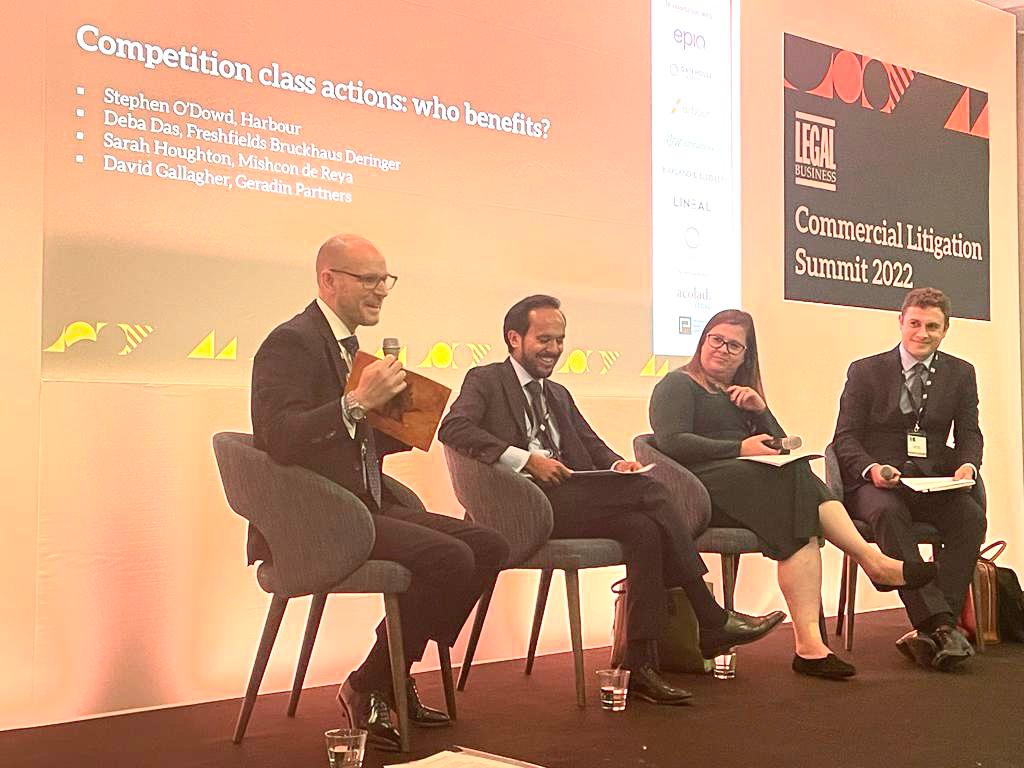 ‘London as a global disputes hub’

Lord Wolfson QC of One Essex Court opened the panel and mentioned the potential for competition to London from the specialist courts in Europe and Singapore and to a lesser extent Hong Kong and the “very niche” Dubai International Financial Centre (DIFC).

Natasha Harrison of Pallas Partners mentioned that clients prefer London for commercial litigation because they wish to have certainty of process, the rigour of the English courts and English law. Clients do not see that it is more attractive to arbitrate compared to litigation.

Julianne Hughes-Jennett of Quinn Emanuel, thought there had been a 10% increase in class actions in London last year with more consumer opt-out actions and commercial ESG representative actions.

Richard Swallow of Slaughter and May commented that £1bn of funding was apparently available each year in London now, suggesting that it was more funding than perhaps could be sustained by the cases available.

Natasha considered we are at a tipping point, accelerated by the availability of funding and that it can be a zero-risk game for clients since After the Event (ATE) insurance continues to be used to de-risk cases.

Lord Wolfson QC suggested that perhaps there could be a securities list or a class action list in the King’s Bench Division. Natasha supported continued investment in the judiciary and thought specialist judges/lists would result in continued success for London.

This panel sessionwas moderated by Stephen O’Dowd of Harbour Litigation Funding. He suggested that it was arguably never a more exciting time for competition lawyers, citing the growth in fully funded certified cases.

David Gallagher of Geradin Partners considered that in light of recent case law, the certification bar is relatively low now and that there are likely to be fewer appeals against certification decisions. He believes the substantive arguments in cases will have more of a focus going forwards.

Sarah Houghton of Mishcon de Reya expressed that there has been frustration since there was little action in the first five years of the Competition Appeals Tribunal (CAT) regime compared to the past 18 months.

Deba Das of Freshfields considered there is an enormous appetite for competition claims and agreed there was a lower bar to certification. Consumer claims are leading the way, and there are also stand-alone abuse of dominance cases. Nonetheless, he believes that controls are being exercised in the CAT and that an extrinsically weak claim is unlikely to be opted out.

Stephen asked the panel how the CAT regime can distinguish itself in the context of the size of distributions in US class actions where less than 5% of the class comes forward to claim their damages. Sarah thought the answer was to put effort into notice and giving information to class members, taking into account the characteristics of the class. The panel discussed the contrast between claims where class members had internet access, for example, and those who did not.

In the Patourel vs BT case, all the BT customers had an account with BT, and the tribunal thought that distribution might take place without action from class members.

David Gallagher raised that often it was not just “about the money” in these settlements. There is a point of principle as these claims produce a deterrent factor and support the rule of law. These private claims support the work of the Competition and Markets Authority.

Sarah added that there is a concern that the distribution per claimant is very small. However, the regime has led to a boom in competition litigation.

Deba raised that the costs benefit analysis is ever present and explained that the tribunal will consider other factors in favour of certification, in addition to proportionality. In the Qualcomm case, he recalled there could be a low amount for distribution, but the costs were at 5% of the total claim value, so they were not considered disproportionate.

This was a highly enjoyable conference. It was great to listen to what is happening in the market, make new connections and catch up with old friends.